Now - a TRUE classic! I remember playing this on an XT with a monochrome monitor in the firm where my mother worked when I was... huh! - pretty much younger! It's just an experience everyone should have made. Overall an ingenius game! Btw.: Apogee says about this game "we don't care what you do with it" - well, I'd say best is to PLAY it ;) You ask for the objective? Erm... get those brown circle thingies. Jump, climb, avoid things - esp. bullets. That's pretty much it.

Jumpman Lives! is an excellent and faithful rewrite of Epyx's Jumpman and Jumpman Jr., the latter of which was never before made for PC. Written by Dave Sharpless and released as shareware by Apogee, the game contains all 30 levels from the original Jumpman, 10 levels from Jumpman Jr., 5 new levels, plus an easy-to-use level editor. In addition to preserving the look and feel of the original jump-and-run classic, Jumpman Lives! offers the option to jump to a random level, multiple difficulty levels, and the ability to handle up to 4 players simultaneously.

The plot remains the same, except it is somehow now taking place on Saturn and not Jupiter as in the original: as the government's top anti-terrorist agent, you are the only one who can defuse the deadly TechnoBombs. For your task, you have been equipped with JUMP (Jet-controlled Upward movement Propulsion) boots which allows you to avoid deadly terrorist traps and jump around the levels. The game plays similar to Lode Runner: negotiating ladders, vines/ropes, bombs, girders, and enemies, you must pick up all the bombs on each level to go to the next one. Sometimes picking up a bomb triggers different events such as floors collapsing or robots moving, so you must always be on the alert. Like Lode Runner, the game is fast, fun, and addictive.

Unfortunately Apogee did not acquire or license the rights to Jumpman which were still owned by Epyx at the time of Jumpman Lives!' release (the copyrights have since reverted back to Randy Glover in 1994 pursuant to the agreement he signed with Epyx). Apogee was therefore ordered to cease distribution of Jumpman Lives! only shortly after its release, making the game one of the rarest Apogee titles. If you love the original, you will definitely love this excellent remake that was unfortunately unsanctioned by the copyright holder. 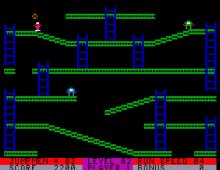