Jabberwock from Japanese programmer Aeju Murasame is a great action/RPG hybrid that fans of Smash TV and Zelda games will enjoy. Your goal in the game is to escape from a labyrinth full of weird fantasy creatures. You fight monsters by casting spells that (naturally) drain mana when used, and you will collect new spells as you go on. There are always tons of enemies to fight, lots of cool spells to discover, and the action is nonstop. Like most Japanese freeware games reviewed here, Jabberwock's graphics is more than decent, and there is even a nice soundtrack. If you love Zelda games but wish they were more arcade-oriented, check out this excellent game from Japan that will give you blistered thumbs before long, as it gave me :) Recommended! 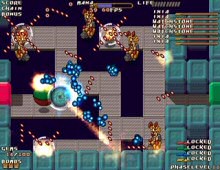