One of the worst games I have ever played, Island Peril is a campy FPS that you shouldn't ever play... unless you are curious about how bad a game can get. How bad is the game? I'll let Steve Bauman's scathingly sarcasting review convince you:

"There's a certain tinge of excitement a game reviewer feels when a new package arrives in the mail. And when the package says Atlantean Interactive, you know you're in for a truly campy treat. Their latest is no exception. Island Peril is a Doom clone of a different sort. It features a brilliant story acted out with much gusto and a flair for drama (and regular readers will be thrilled to hear that the guy who starred in Alley Cats, the best strip bowling game on the market, can still find work). You're Dick Danger, D.A., and your bikini-clad girlfriend has been captured by the Evil Boss (that's E.B. to you and me). You must kill a bunch of things and sit through the worst video ever created for a computer game until you get the final confrontation, where - you'll just have to play to find out.

There are some amazing features implemented here that leave you wondering why every 3D game designer has yet to adopt. There's the legendary "drop to the floor" - why have the player fall when we can have them warp to ground level? There's the soon-to-be-ubiquitous "walkthrough villain," whereby you can walk right through the bad guys. There's the "four-handed" interface, necessary to use the bizarre keyboard/mouse/joystick game interface. There's the "3D engine" which allows you to get totally immersed in these lifelike environments (that rival Wolfenstein 3D for complexity and realism). There's the sound, oh the sound. The cheesy grade-Z porn background music during the video. There's the cackle repeated over and over, over and over, over and over - Oh, enough already.

In case you wondered, this is pretty much the worst game to grace the hard drive in a long time..." Some campy games are so bad they are funny and entertaining. This, unfortunately, is not one of them. 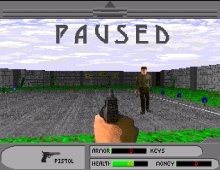