We already knew that Japanese freeware developer CNC Darkside had a taste for bizarre fusions: G-Type (R-Type+Gradius), Super Mario XP (Mario+Castlevania)... This time, they took the characters of Card Captor Sakura, and put them in a horror setting, with Sakura's school transformed in a dark manor full of demons and zombified students. Clow Cards, which were gracious figures in the original, are disguting boss creatures here. Many referencies to Castlevania, and the choice for the soundtrack is quite peculiar: all songs from the car racing anime Initial D! They don't even remotely fit with the horror setting, but probably it was a precise intention. A real mixed bag, but quite fun nonetheless.

The game itself is an explorative platformer in the vein of Metroid and Symphony Of The Night: the playing area is like a single, big level, you start quite weak, and by acquiring new powers and more strenght, you gain access to new areas, and so on. Your weapon is a... yoyo, though it's quite more similar to Blade's weapon :) The elimination of bosses gives you new powers, or opens doors to new areas. There are some rooms where you can save your progress.

But let's get to the most important point... Is the game fun? Yes, certainly. Especially the bosses, they are quite fun to fight: in one case, you'll even get an active help from Li Shaoran (he can even finish the monster off!). And, like in all the games of this genre, it's always a pleasure to discover new powers, and see the monsters you feared turning to wimps ;) I played the game, never stopping, from start to end... Which, unfortunately, comes too early. The school is not so vast - in fact, when you know all the things to do, you can finish the game in about an hour. Probably knowing this, the authors added four mini-games: much better than I expected, especially the Kero-chan one, a short but fun and nicely coded shoot 'em up!

The year 2002 has seen better freeware explorative platformers like Eternal Daughter and Akuji The Demon; but, still, GF Captor Kurara is very fun while it lasts. Its graphics are nice (but pity for the small window, no trace of a full screen mode), and it deserves credit for the absurd setting that CNC Darkside put up - I wonder what their next madness will be. 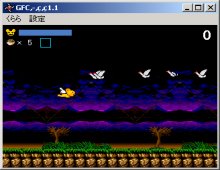