Fire King is a clone of the arcade classic Gauntlet. The game can best be described as an action/rpg hybrid, one of the first arcade games offering cooperative play and up to 4 players it was a sure hit and in the following years the market was flooded by clones on various platforms. Fire King is a sequel to Demon Stalker, offering a great deal of enhancements compared to it's precessor and even compared to Gauntlet itself, but is limited to 2 players.

The game continued where its predecessor left off, allowing the players to explore a gigantic 3D continent spanning a range of diverse locales, from enchanted forests to deserts and dungeons. The game required the player to solve the devious puzzles and intricate mysteries which hold the key to the Fire Kings? domain, and destroy the Death Beast. You can choose between 6 different characters, each with different abilities in the following areas: Magic, Armor or Strength. Magic make the spells you cast stronger & killing more enemies, Armor makes you take less damage and Strength makes it easier to kill the swam of enemies. You will also pick up spells and other helpful stuff, the death spell being a favorite of mine & always good to have in a tight situation. Though the game is an action shooter in a fantasy setting, Microforte has put in some puzzles that you'll need to solve to get though the game, and some on occasional amusing stories to make the game more interesting. Fire King is recommendable for the inexperienced player and you'll double the fun by playing it with a friend. But be prepared the ememies are coming in drowes and you will have learn this lesson very quickly & you can't kill them all - trying to do this will result in a premature death :) 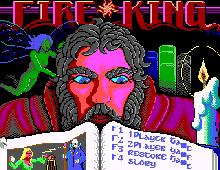