A fun collection of circus games by Chris Gray (of Infiltrator fame), Fiendish Freddy includes many subgames, based on familiar circus highlights including high diving, juggling, trapeze, tightrope walking, and human cannonball. Fiendish Freddy in the title is an evil clown who's out to obstruct you in each event. For example, he will throw smoke bombs during the knife throwing event to throw you off your aim. You must collect money by performing successfully to keep the circus afloat. A fun and addictive game. 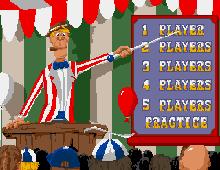