"It's not always as easy as it sounds to shop on the Internet. There is a lot of obstacles and temptations out in cyberspace which will mislead you from your destination. You have to use the right path from the beginning. Your goal is to help Claude find the products he's looking for. The easiest way is to surf right into GulaSidornas Galleria, where you can find everything Claude desires.

You will receive points depending on the distance that you surf the Internet. There is also a lot of points to score in the Galleria if you collect the products. If you run into any obstacles on the way, you will lose one of your surfboards. Be careful with them, you only have three boards in stock."

Extreme Shopper is one of the hardest games from E-Game, although it's also one of the best. You basically need to jump over, and duck under, obstacles at the right time. Make one mistake, and it's time to start the level over again. The graphics and animation are top-notch, and the soundtrack is much better than average freeware games. Randomized levels extend the longevity, making this one of the best time-wasters to play during a short coffee break. Highly recommended! 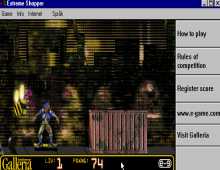