This is one of the oldest fighting games ever. This is the predecessor of today's fighting games and it is still a nice game to play. You can make lots of moves and you need quick reflexes in this game.

I remember this game on the ZX Spectrum and it's fun. I don't know for sure if it's based on the Arnie Film of the same name (in Europe the game was released as Barbarian while everywhere else it was Death Sword). The game consists of a series of one on one sword fighting bouts against ever more difficult opponents. Use a range of moves (blocks, thrusts and the ever cool overhead chop) to defeat your opponent and and win the game. Not a whole lot more to it than that.

However, what is really great about this game is the two player option where you and a friend compete to against eachother. Some of my fondest memories involve decapitating the kid who lived down the street.. (you know how the rest of this joke goes, so I wont bother). Great fun.

A barbarian fightgame. Kill your opponent by attacking him with different moves. The scenery is quite alright for this CGA graphics it displays.. 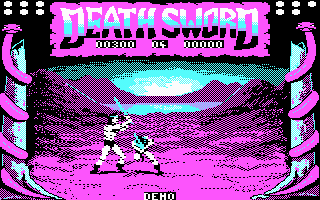