Cybermercs is a decent Diablo-style action/RPG hybrid that is disappointingly too shallow to appeal to fans of either camp. You controls cybernetically-enhanced mercenaries who has been recruited - naturally - by a government in its desparate fight against the alien threat.

Cybermercs is essentially Diablo transported to an alien world, a very "light" RPG that allows you to build and develop characters through a series of mission-oriented maps. The emphasis, beyond the development of a capable warrior, is on shooting things and completing simple objectives which are rarely more than "terminate all aliens on the map." The graphics are decent: the isometric view and interface are reminiscent of X-COM, minus the complexity or the challenge.

In summary, Cybermercs is little more than a "second-hand" game that borrows heavily from Diablo, except it is much shallower and easier. The game may appeal to action fans who enjoy the sci-fi setting, high-tech weapons, and varied maps, but RPG fans will likely turn their nose at this marginal game. The game's dated graphics, uninspired missions, and simply terrible AI won't make the game last long on anyone's hard drive. The life of a 22nd century mercenary needs to be more interesting than this. 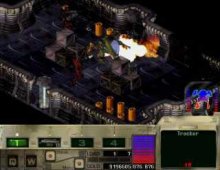 People who downloaded this game have also downloaded:
Doom 2D, CyberMage: Darklight Awakening, House of the Dead 2, The, Crusader: No Regret, Incoming