Oh yes - a good oldfashioned top down shooter. Fasten your seatbelts, stop smoking - here we go! I don't have the faintest idea of the background story - as far as I can tell the game is in japanese and text comes as weird ascii garbage. Does that matter though? Naaaah. You get the idea very fast - shoot everything that moves and avoid getting shot yourself. All stages got a "big bad guy" (in the form of an extra large space ship) at the end so well... pretty standard concept. Graphics and music are both very nice and with this game being under GNU General Public License (which technically is not quite the same as being freeware like some sites claimed) you really can't go wrong here.

Creature Jungle 16 is an excellent freeware top-down shoot 'em up (affectionately known as "SHMUPS" by fans) game from Japanese designer Takeuchi Kouta. The game's objective is the same as all the other shooters: shoot everything and anything that moves. Creature Jungle 16 continues the excellence of Japan's freeware SCHMUPS community: the game is good-looking, the animations are smooth, and the action fast and furious. I find the game a bit too difficult, what with so many weapon effects and fireworks flying around the screen at once. SCHMUPS fans will probably find the game challenging and fun, though, and the great graphics are hypnotic enough to glue you to the screen for hours on end. 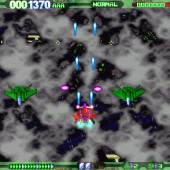