Ah... the memories. Cosmic Crusader was the very FIRST IBM PC game I played. It was one of the pre-loaded software on our brand new 8088 IBM -- running at a whopping 8Mhz :) The game itself is nothing new-- it's a standard sci-fi shooter that Space Invaders fans will instantly recognize. Shoot the encroaching army of alien ships before you are shot dead or crushed when they come too close. Been there, done that.

Although it doesn't sound like a lot of fun, Michael Abrash' magic works its wonder again this time. For no apparent reason, I stayed up late at night, for days/weeks/months in a row just to play this incredibly addictive game. I can't quite explain why the game is so addictive. Perhaps it's the addition of power-ups, such as a shield that can help you in tight spots. Perhaps it's the wonderful animations and very good graphics (utilizing 4-color CGA to great effect). Perhaps it's the fun surprises that each new level brings, such as the giant alien ships that appear from time to time to give you a chance for a huge bonus. Or perhaps it's the fact that Cosmic Crusader was one of the 3 games I had on that computer, and the other 2 are utter crap :) Whatever the reason, though, I simply can't find fault with this hugely underrated shooter. Be prepared for a long trip down memory lane when you play this one :) 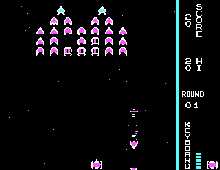 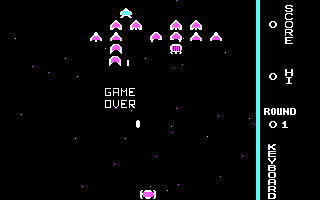