Capstone once again rose (sank?) to their notoriety as one of the worst game developers in history with this awful Wolfenstein 3D clone. Even id Software's celebrated Wolf 3D engine can't save Corridor 7 from being a very poor clone that looks even worse than Wolfenstein 3D, the predecessor of DOOM. Just about everything that could possibly go wrong in a 3D shooter *does* go wrong in Corridor 7 -- terrible graphics, boring levels, and extremely monotonous gameplay that forces you to shoot ugly, heavily pixellated aliens over and over again. A Real Dog, without any redeeming quality that makes it worth your while. Really NOT recommended, unless you are masochistic, that is ;) 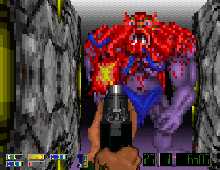