Clyde's Revenge is a pretty bad sidescrolling platformer that ruins the creative no-enemies premise with dull gameplay and interminably boring levels. Basically your goal is to collect every stone on the level to move on to the next, making tricky jumps and solving simple puzzles in the process.

While the premise may be original, the actual game is far too boring to hold it up. You will have to go in circles more than once to find that last stone needed to complete the stage. What's worse is the fact that you will need *hundreds* of these stones in later stages to beat them. This wouldn't be so bad if the levels are creative or interesting, but they are not. You will traverse hundreds of rooms that look just like the last ones, except with ledges and stones placed in different spots. There is very little change in scenery, and the puzzles are far from the ingenious quality of Epyx's Impossible Mission 2 or Delphine's Flashback to keep you interested.

So who might like Clyde's Revenge? Well, if you have a lot of patience (and I do mean a *lot*), you might find Clyde's Revenge a refreshing take on the genre that usually throws hundreds of baddies at you from every direction. But if you want a pleasant and relaxing "exploration" game, there are simply better games out there - see our review of Seiklus for example. Thumbs down on this lackluster game that isn't that good - although it is still much better than Clyde's Adventure, the first game in this short-lived series. 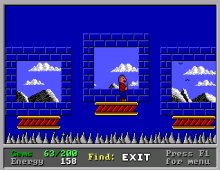