Fun mini-games collection comparable to Epyx's sports series, but set in an unusual scenario of a circus. Circus Attractions was published by a company called Golden Goblins. I only heard very few from them back then. They obviously were in some way related to Rainbow Arts - probably a sub-label. The game lets you compete in five events: knife throwing, clown jumping (fun-- must be tried to be believed), juggling, trampoline, and tightrope walking. There's also a nice two-player team-play option. A fun game overall, with a few little gags that I won't spoil here. =) The Amiga version is, as usual, much better, but this PC version is not bad. Recommended, especially to fans of Fiendish Freddy's Big Top O' Fun or Epyx' series of unconventional sports games such as California Games. 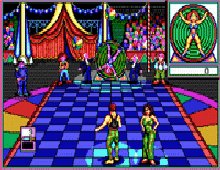