Captain Fizz Meets the Blaster-Trons is a great fanmade remake of the Amiga/ZX Spectrum game of the same name, developed in 1989 by Psyclapse, Psygnosis' sub-division. The review at Amiga Games Database says it all about the original, of which this PC version is a very faithful remake - although it's based on the ZX Spectrum version and not the graphically superior Amiga one.

"Playing Captain Fizz is like playing a cruder version of Alien Breed or Cytron (like Captain Fizz, it is also by Psygnosis). All three games feature a character running through metal mazes, seen from a top-down viewpoint, blasting enemies and using keycards on doors. It's really a space version of Gauntlet.

The screen doesn't scroll, but flicks to a new section each time you reach the edge. The bad guys can fire from another screen onto yours, so often you can get hit by a volley of shots from nowhere. You can do the same to them though.

Doors are unlocked by keycards, which can be found lying on the ground. The player can also pick up points, armour and extra firepower too. Credits can be exchanged for more health at terminals. Sometimes areas are sealed off with a forcefield, which can be disabled for a certain time by pressing combinations of switches.

Like Gauntlet and Alien Breed, this is a multiplayer game. Unlike Gauntlet, it only supports up to two players, but does have the split screen mode. However, in one player the view is still only half the screen, which seems a bit lazy. The multiplayer option livens the action up somewhat, which is pretty common with Amiga games - two heads are better than one.

Although the title screen is well crafted, the in-game graphics are amateurish and the sound effects are pretty weedy. This gives the game an unprofessional feel and makes you think that the programmer wasn't very experienced on the Amiga. Another gripe is that it takes several shots to destroy the weakest robots, so it makes you feel quite powerless in the game.

While not a bad game, you can't help but feel that there are better games of this genre around, such as Gauntlet and Alien Breed, as mentioned before. Paradroid 90 is also much better." 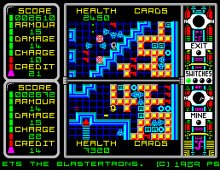