BMF is a fun freeware combat game from Imagination, a now-defunct Finnish developer. Formerly released as shareware, the game is made freeware in 2000 along with other Imagination games. The game is similar to Assault Trooper and Cannon Fodder: you control a tiny commando who are sent on Rambo-style missions against the enemies. Both single player and deathmatch (via hotseat/IPX connection) are available, although naturally it's more enjoyable to play against your friends in deathmatch mode ;)

The plot is negligible as with all games of this type, but here it is anyway: after World War 3, one of the most popular sports is gladiator fights between clones of real soldiers. You view the action from bird's eye view, and there is "fog of war" that adds to the realism. One of the game's highlights is the wide variety of missions and other equipment you can take on missions: ranging from grenades and rifles to radars and clocking devices. In another nod to realism, you have to watch your stamina level (e.g. running will soon make you tired), and the radar shows the direction enemy sounds are coming from. Similar to the dynamic gameworld of famous FPS such as Duke Nukem 3D, the environment in BMF is more or less "live": different terrains such as ice and swamps affect your movement rate, and you can blast walls and doors into smithereens. The graphics are more than adequate, and the game deserves high marks for rocking music tracks.

Overall, if you enjoy action games such as C-DOGS but want a bit more variety and realism, BMF is well worth a look. It is a vast improvement from Men in War, Imagination's earlier game, and will keep you entertained for hours on end. Highly recommended! 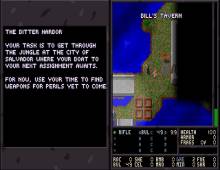