A solid conversion of a little-known Konami arcade game of the same name, Ajax is a challenging vertical scrolling shoot-em-up for one or two players. The objectives of the game, simple enough, are to destroy all enemy forces without being destroyed, and accumulate the highest score possible. The player takes control of a helicopter capable of eight ways movement armed with an unlimited supply of bullets and bombs, each fired with a separate button. A third button detonates a limited supply of smart bombs that destroy most enemies within a certain radius of its detonation. When the 2 players option is selected, each player takes it in turn to play the game and the players score is recorded for the players to view after playing.

Like most shoot-em-ups in the late 1980's, Ajax main attraction is power ups design. Enemy aircrafts fly along pre-defined flight paths and fire bullets at your location, so continuous movement is necessary to avoid damage. In addition to air hazard, you will also have a lot of ground forces to contend with. These pesky enemies can be dispatched with bombs, but accuracy and timing are important as bombs have a small blast radius.

Two nice features that Ajax introduces into the genre are an intelligent target crosshair, and smooth mouse-based controls. A crosshair follows the player's aircraft around the screen to show where the projected point of impact of a bomb will be, and light up when a target is in range. The mastery of it is vital for progression to the later levels of the game, because it is very challenging: hordes of enemies will come at you nonstop from every which way, and there is very little damage your helicopter can take before being blown up. On the other hand, most enemy units follow a fixed flight pattern, so if you have a good memory and/or replay the game enough, you will sooner or later be able to shoot even before they appear. This predictability, though, shouldn't bother any action fans, because it keeps the game at a playable level for those who are not joystick experts. There are some tricks the game uses to keep the pressure up, such as floating clouds which obscure the enemies, and inventive end-level bosses. When some of the power-ups are selected, it can sometimes be confusing to see where the enemy bullets are if a large number of objects is on the screen, but this weakness, again, is true about most shoot-em-ups. Overall, if you enjoy a top-down shooter, Ajax is well worth a look. It's not the best a PC shooter can offer (meaning it's not Raptor), but it's still excellent, and worthy of notice as one of the very few games that feature a very intuitive mouse-based interface. 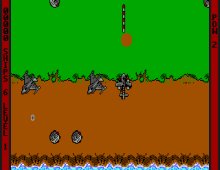