Universe is a decent sci-fi adventure that features some interesting gadget-oriented puzzles, although the banal plot and bad writing sink the game to obscurity. Nevertheless, Core Design's second effort in the adventure genre is a better game in every respect than the awful Curse of Enchantia. The interface is also rather awkward, so only those with a lot of patience will go through this long journey through different sparsely-populated planets. It is no wonder why Core never tried their hands at writing another adventure game. Given how popular Tomb Raider has become, they have certainly found their true calling . 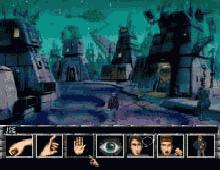 People who downloaded this game have also downloaded:
Sanitarium, Shannara, Time Paradox, Shadow of The Comet, Trick or Treat