A fun adventure based on a popular children's tale about a shipwrecked family, Swiss Family Robinson was designed for young adventurers, ages 7 to 12. As such, it is a commendable attempt that is unfortunately marred by a poorly designed and picky parser that will frustrate all but the most patient players.

The game follows the novel's storyline very closely: you are Fritz, the most resourceful of the Robinson family, and your job is to first get everyone safely ashore from the shipwreck, then survive the various dangers on the island. You perform actions via a standard verb-noun parser, although the novelty here is that the game will try to guess what word you are trying to type, then complete it for you if you just type a few letters and press SPACEBAR. It will also automatically fill in prepositions for commonly used nouns, e.g. ABOUT when you type TELL. Although this is very helpful for budding adventurers the game was designed for, this feature is implemented to the hilarious extreme, since the game will try to complete the word even when you've typed only *one* letter :) The parser also suffers a bad case of "guess the verb" syndrome, where you know what you want to say but the game will not understand anything except the precise sentence the designer had in mind. You must, for example, TELL characters ABOUT actions you want them to perform, but cannot ASK them to do it (the verb ASK isn't understood at all); GO BELOW is understood, but DOWN isn't. This precision makes gameplay needlessly frustrating, and will likely discourage young gamers -- even experienced IF players will probably get stuck a few times.

Despite parser blues, the game does have several fun features that help alleviate the problem. Every object or person you can interact with is represented as an icon on the screen, so you won't have to guess which word in the room description is interactive. You can also interact with any one of your family members, although they don't usually know much, and will respond to most TELL ABOUT... sentences with "Fritz, that's good to know." Franz, your youngest brother, is the only family member whose help you need to complete the game. The game also includes a great on-line nature guide that you will often refer to for hints to solving nature-related puzzles.

Speaking of puzzles, most of them are a lot of fun despite the pickiness of parser I spoke about earlier. They mostly involve real-life improvisation that fans of MacGuyver will enjoy, such as building a makeshift raft, finding a way to crack a coconut, and so on. Because some of these puzzles are from the novel, anyone who has read the story will find them a bit too predictable. Overall, Swiss Family Robinson is recommended for fans of the book and anyone who likes real-life puzzles. The game's quirky parser makes it too hard for the age group it was designed for, so parents should play along with their children to minimize frustration. Highly recommended, with some reservations. 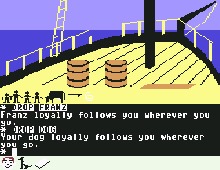