Roundly criticized by many reviewers as one of the worst adventure games ever made, Spud! is actually a pretty decent point-and-click 3D cartoon adventure from UK developer Charybdis Limited. Similar to Zork Nemesis, the game features the ability to view the gameworld from 360 degrees - billed here as "Super-Lookaround-O-Vision." There are plenty pre-rendered graphics, dozens of wacky characters, funny speech, and over 200 locations to explore.

The zany plot is hard to describe: Spud (your alter ego in the game) is Santa Claus's grandson, and your job is to rescue Grandpa and his magical toy machine from the clutches of the evil Doctor Chilblain. On your quest, you will visit traditional Christmas sites that include pixie mines and a penguin village, as well as a submarine and - naturally - Hell. All the locations are appropriately alien-looking and rendered in a funny cartoon style, although most of them are too pixellated for you to make out much details.

While the game is 3D, all the puzzles are traditional inventory-based style. Some of these are obscure, but most are logical and some even creative. Some puzzles unfairly require you to take the necessary item out of the inventory and hold it long before the puzzle begins - a symptom of a bad "save-die-restore" kind of design that plagues a lot of adventure games. However, the most annoying facet of the game has to be the fact that you can die at any time. This necessitates frequent saving, which is also frustrating because you are given only three slots to save, without the ability name them. Also, the game has plenty of bugs, including some severe ones that will cause your entire system to inexplicably freeze or shut down. Charybdis never released a patch to fix the problems (presumably due to the game's poor sales record), so you would need a lot of patience to finish the adventure.

When all is said and done, though Spud! doesn't deserve all the blame that reviewers heaped on it. True, it's a buggy game that is flawed, annoyingly pixellated, and has a silly story that many gamers would consider stupid. But to the game's defense, it is original, funny, and has a strangely compelling kind of charm that graces the best of "B" movies. I enjoyed the game while it lasts, although I would have liked it a lot more if it weren't for the bugs. Though not a top game, Spud! is well worth a look for all adventure game fans, especially those who like the quirky Normality. 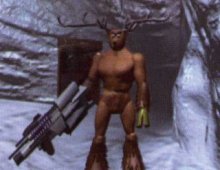