Space Adventure Cobra is a really awful SEGA CD game adaptation of one of my favorite manga/anime series. Written by Buichi Terasawa, the series are about the exciting exploits of Cobra, a wise-cracking, arrogant, cigar-chewing space pirate whose most potent weapon is a "psychogun" concealed in his left arm. In more than two decades since his inception, Cobra has attracted a sizable and loyal fanbase, especially in Asia and Japan. As a fan who grew up watching Cobra on TV (which turns out to be one of the few anime series that are better than manga originals), it's hard for me to say this: Space Adventure Cobra is a horrendous game. One would think a blockbuster license like Cobra in the hands of reputable Japanese developer like Hudson Soft would guarantee a great game, but the result is the opposite.

Space Adventure Cobra is an adventure game similar to Konami's excellent cyberpunk adventure Snatcher. But as with many other bad games, Cobra is a result of horrible implementation that can't save a great concept and premise.

The graphics (especially the animated cut-scenes) are quite good and the story isn't that bad. You start the game with Cobra sauntering into a bar, looking for his curvaceous robotic partner. The game then goes downhill very quickly as you read atrocious writing and hear even worse voice acting. Unlike Snatcher where some thinking is actually required to proceed, Space Adventure is so ludicrously easy that it doesn't deserve to be called a "game." Similar to many Hentai games, there are usually two things you can do: LOOK at various things, and THINK about different subjects. You often have to LOOK and THINK the same thing (ie. word) several times before something actually happens.

The game contains a large number of locations, but most of them are so empty that it's more boring than fun to walk around. Cobra's spaceship for example spans many screens, most of which have nothing of interest. Combat is similarly mundane: Hudson Soft squanders the chance to add some challenge to this game by making it multiple-choice - you just choose whether to kick, punch, or psycho-gun your enemies. Your choice has no impact on gameplay as far as I can tell, because I always win no matter what I pick.

The only saving grace of this game is the storyline, which is somewhat interesting, although far from the quality of the best Cobra episodes on TV. True to the manga's raunchy art and seventies sci-fi feel, there is more than a few scantily clad women in the game, and Cobra isn't shy about telling you his opinions. If you are offended by sophomoric sense of humor, stay clear of this game. But if you can tolerate it as a part of Flash Gordon-style sci-fi, you'll have some fun following Cobra around the seventh galaxy.

As a game, Space Adventure Cobra is really bad. If you can stomach hours of boring, repeated-click-to-advance-story kind of gameplay with no challenge whatsoever, you'll find a decent space opera anime underneath. Fans of the manga/anime series like me will probably torture ourselves to finish the game just to see how it ends, but you won't miss much if you decide to pass this one up. Some old games are rare because not many copies were printed despite being good games, while some others are rare because they are such terrible games not many people wanted to buy them. Space Adventure Cobra is the latter case. Avoid at all costs, and check out the original anime series instead if you are interested in the story. The fact that it was based on one of my favorite anime series and a half-decent story are the only things saving it from the Real Dog status here. 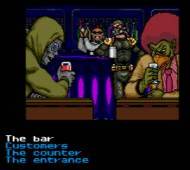 People who downloaded this game have also downloaded:
Space Quest 0: Replicated, Uncertainty Machine, The, Lost Files of Sherlock Holmes 1 (a.k.a. Case of the Serrated, Switch (a.k.a. Panic!), Time Quest