Shogun is one of the earliest adventure games that combine traditional adventure with both action and strategic elements-- an attempt that proved largely successful here. In this unique adventure that foreshadows Sid Meier's Sword of the Samurai, make your way from samurai to Shogunate of Japan by recruiting followers, fighting enemies, collect treasures, and solve typical inventory-based puzzles. A good game that stands up well despite bland CGA graphics and difficult battles.

This is a very 'odd' adventure game. The setting is medieval Japan. You can choose several characters to play with and become a Shogun. You wander round some nice screens in which you meet people or have to fight a bit. The extreme odd thing about the screens are that they are shown from the site, though you character walks through viewed from the top, that means you 'fly' around a screen which is 2D, get it? If not, just play this masterpiece. 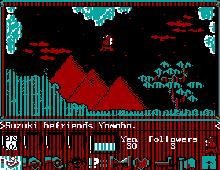 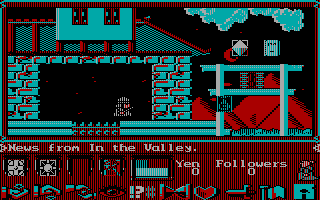