Rode Kill: A Day in The Life

Rode Kill: A Day in The Life is the first adventure game by Zombie Chow (Shawn Guzzo), and already it's quite an achievement. It evolved along with his knowledge of the engine and his abilities. The game gets better the further you get in it. Not only because you get more involved in it-it literally gets better as the author learns.

There is a lot of humor in Rodney Kill (full name of Rode Kill). The reason for this lies partially in the two main influences for it, Space Quest and Monkey Island, which are both very funny series. The game borrows a few elements from these games as well. The main character for example is a janitor, and his adventures take place in deep space. The backgrounds and characters are drawn in a similar style to Escape from Monkey Island. In particular, the characters look so stunning you'll forget you are playing an amateur adventure game.

The interface is SCUMM-like, so shouldn't give serious adventure game players any trouble. It's easy to learn for those of us who aren't familiar with it though. It doesn't however have save, restore, or quit button. You'll just have to memorize several keys (this is identical to older LucasArts games e.g. Monkey Island, though). For the record, and because we love you: F5 saves, F7 restores, and CTRL-Q quits.

The game and puzzles were developed a bit on the fly, which means that the story doesn't go anywhere specific. It just tells you about a day in the life of Rodney Kill. A rather hectic day, yes. But there's no evil maniacs to dispose of in this one, nor are there any frail young ladies to be rescued. There is however one constant in this game, and that is garbage. Most puzzles involve garbage, and just about every room in the game has some. Not really surprising, as this game is about a day in a janitor's life, but still. It's not likely you'll find a dirtier game than this one that doesn't have adult-only status.

It all starts with Rodney Kill wanting to go on shore leave. He has just woken up (after a very nice introduction sequence) and can't leave until he has finished his chores for today - which is incidentally the first puzzle in the game. The rest of the story gets developed throughout the game, and is a large part of the fun this game offers, so I won't spoil it here. Suffice it to say that things don't go exactly as planned.

The puzzles are quite good, even though they're very linear. Most of them won't give you any trouble, as they are pretty standard. You've seen similar things before, and you'll see similar things again. Some puzzles, particularly in the later part of the game, will give you trouble. And this is where the game falls a bit short, especially because the solution is not always hinted at. However, they make perfectly logical sense after you find the solution, and that is what a good adventure puzzle should be like.

Music is original, and sounds quite nice. There are only two songs in the game, but they fit the game. The game starts with a very nice introduction... you'll keep singing the 'Tiny Bubbles song' for quite a while. And again, the music is original, which is perhaps the best proof of the amount of work the author put into this game.

The game has a few flaws, such as a rather long loading time between rooms, and a bit of a strange interface. But this doesn't affect the overall gameplay, which is very good. Anyone who enjoys a humorous adventure game will surely enjoy playing this one. 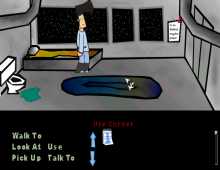 Rode Kill: A Day in The Life screenshot

People who downloaded this game have also downloaded:
Rode Quest 2, New Adventures of Zak McKracken, The, Lost Files of Sherlock Holmes 1 (a.k.a. Case of the Serrated, Out of Order, Neverhood, The