The Rob Blanc games are a very unknown adventure series made by Ben Croshaw. This is the third installment, and undoubtably the best one. The first game was very short, and told the story of how our hero became to be Defender of the Universe. The second game told us again how Rob Blanc became defender of the Universe. And introduced a sidekick by the name of Paul Greenwald. And in this third installment, they both finally get down to business and start solving problems.

The game is created using the same engine as both Larry Vales games, and uses an interface very similar if not identical to the one used in Sierra's SCIV games. This is just your basic Point & Click adventure, so nobody familiar with those should have any trouble playing it.

And now on to the plot. This evolves slowly as you are playing the game, but basically is your standard bad unknown nemesis thread story. Rob and Paul, after taking care of a local space wombat infestation, find out that something has caused the universe to duplicate. Everything exists twice, as is shown in the introduction movie. This doesn't affect gameplay a lot otherwise, so don't expect any Day of the Tentacle-ish situations. At least, not a lot of them ...

The graphics are very good for an amateur game. The only negative thing I could say about them is that they don't use a lot of different colours. For anyone who still has bad nightmare about CGA screens, you will be dissatisfied to head that the colour cyan features a lot in this game. The graphics have all been drawn in MS Paint, but they are diverse enough to hold your attention.

The best thing about the game is the text. There is a lot of it in the game, and it's of a lot better quality than you'd expect in an amateur game. You can look at everything, and do a lot of stupid things as well. Nothing is more fun than picking up ceilings, or tables, and getting a reply for it. The game is written by an englishman, from the UK, so it does use some typically English expressions and words. But that shouldn't really be a big problem to anyone.

The music in the game is your basic MIDI stuff. Nothing special, it's just there, and it does it's job. It's not original, but as this is a one-man project, this isn't a big surprise. The puzzles are good. Not too difficult, and usually hinted at. Some of them are drop dead easy, and those are not always the ones at the start of the game. But I guess how this is percieved differs from player to player.

I won't spoil things for you, but the game isn't as long as you'd expect. It seems as if the author somewhere along the line decided to abandon his project, and has quickly added an endgame to it. He also tells us on his website that he has no interest in making other Rob Blanc games. But don't let that spoil your fun, and start playing this entertaining free game. You'll enjoy it. 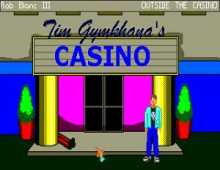 People who downloaded this game have also downloaded:
Peasant's Quest, Out of Order, Residence 44 Quest, Trials of Odysseus Kent, The, Permanent Daylight