A much better game than its horrendous predecessor, Return to Ringworld is a fun adventure still based on Larry Niven's best-selling sci-fi series. While the plot will be familiar to Niven fans and the puzzles still border on the easy side, Return to Ringworld is much more of a game this time around, with some engaging puzzles and good plot development.

The game begins right where the first game Ringworld: Revenge of The Patriach left off. You are Quinn, a 29th century fugitive, hunted by every society in Known Space. It's a strange reward for preventing a Puppeteer genocide and averting another interstellar Man/Kzin war. There is a computer onboard your ship that contains a lot of information on the races, planets, and artifacts that populate Niven's Known Space. This is an excellent idea because it quickly introduces players unfamiliar with Niven's books to a universe that is rich in both content and detail. It does, however, place a heavy reading load on the payer at the beginning of the game. Since there are clues to several puzzles later in the game buried in the database, it is advisable to devote one save-game slot to the point before you leave the ship.

Gameplay is much improved from the first game, although it is not flawlessly implemented. You can now switch back and forth between the three characters (Quinn, and his companions Seeker and Miranda) at will, and solutions to several puzzles require that you play the right character, or co-ordinate the actions between them. While switching between characters is fun and adds to the game's appeal, it is not handled well. Many times, it will appear that all three characters are stuck, when in fact you just need to perform some action you did earlier in the game that failed because the other two characters did not do something else first. It isn't always clear that actions need to wait, and redoing everything you did before can stretch your patience. Fortunately, most of the game's puzzles are logical, and have only one solution. The worst offenders, unfortunately, are a number of huge mazes in the game. Although some are quite clever (one of which requires you to think in three dimensions), many of them are pointless. The game designers decided to give the player an idea of Ringworld's size by showing screen after screen after screen of similar or identical graphics. This means that you will need to cross ten or more screens just to get to a monorail car, for example. This is very annoying, because it makes you unsure of whether or not you are walking in the right direction, and going back somewhere to try something else can be very frustrating.

Despite all its weaknesses, though, Return to Ringworld is a satisfying game that should please all sci-fi fans. Its depiction of Niven's complex political drama is more faithful this time around, and co-ordinating actions between the three characters and hearing them tease each other is a lot of fun. Recommended for anyone interested in the genre, although expert players will find it an easy challenge. 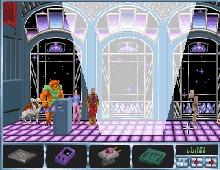