Return of the Phantom

Return Of The Phantom is an adventure game made by MicroProse in 1993. As you may have guessed, it is based on the famous Phantom Of The Opera story.

You play as Inspector Raoul Montand. You have attended the Paris Opera House to enjoy the first performance of Don Juan Triumphant - an opera written over 100 years ago by Erik, Phantom Of The Opera. However, during the performance, a chandelier crashes down onto the crowd. I recommend you watch the intro, to see the famous 'chandelier crash'.

The manager of the Opera House, Monsieur Brie, asks you to investigate things and find out who is responsible for 'The Chandelier Tragedy'. All of the clues say that the Phantom is responsible, but that is not possible. The Phantom is dead ... isn't he?

During your investigation, you have a nasty fall. When you wake up, it is 1881. You have somehow travelled back into the past. The Phantom is alive and well, and is haunting the Paris Opera House. Even more surprising is that you are no longer Inspector Raoul Montand. You are now Raoul de Chagney and you are engaged to Christine Daee. You must explore the Opera House, and find the secret of the Phantom Of The Opera. Can you save Christine, and put an end to the Phantom's reign of terror?

This game uses a nice point and click system, which makes it easy to play. At the bottom-left of the screen, there is a list of verbs - Look, Open, Give, Talk To, etc. You can use these verbs to interact with your environment. Next, is a list of your inventory items. You can scroll up and down this list by clicking on the up and down arrows. If you click on one of your inventory items, you will see a small picture of that item in the next box. In the final box, you will see any extra actions that can be done with the currently selected inventory item. For example, click on 'Large Note' from you inventory list to see a picture of the note. The word 'Read' will appear in the last box. Simply click on that word to read the large note.

Click on 'Talk To', and then a character, to start a conversation. A list of dialogue options are shown at the bottom of the screen, and you can choose what to say. I liked the fact that characters are shown in a 'pop up' box as they talk.

Pressing 'F1' will bring up a menu to allow you to save your game, restore a game, check your score, or quit the game. Pressing 'F5' will bring up another menu that gives you some game play options. You can turn music and sound on or off, adjust the smoothness of panning, and a few other things.

The only thing I did not like about this game is the horrendous maze. If you take a wrong turn, you can sometimes 'jump' to another area of the maze. This makes is very easy to get lost. I have included a map, as well as written directions as separate files, so you can find your way through.

The graphics are very rich and detailed, which really brings the whole game to life. Everything from the grandness of the Grand Foyer, to the gloominess of the catacombs makes the Opera House seem real.

The characters themselves are very well animated. All their movements are nice and smooth, and it makes them seem very lifelike. The whole atmosphere draws you into the game. As I said earlier, I especially like how characters are shown in a 'pop up' box as they talk, and the conversation is shown as text, next to them.

The music is very 'organy', which really suits the mood of the game. There are a few sound effects, such as Raoul's footsteps as he walks, the door squeaking as you open it, and wheels of the prompter's stand squeaking as you push it.

There are 2 modes of play for this game - Novice or Challenging. There is very little difference between the 2 modes, and all the puzzles are quite easy. I should also mention that you cannot die in this game. If you fail at a puzzle, you are given another chance to complete it.

This is a lovely game for any adventure game fan as well as Phantom of the Opera fans. The story is well written, and the music is just right for the game. The point and click system makes it very easy to play, and the graphics are incredibly smooth. However, the puzzles are slightly on the easy side, and the maze is very hard. Overall, this is a very nice game that I highly recommend. 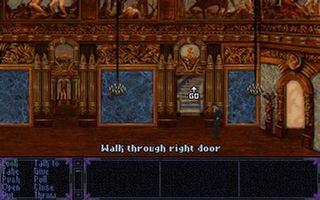 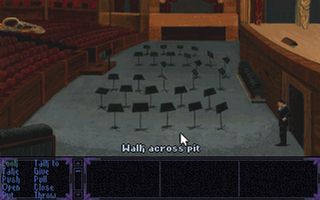 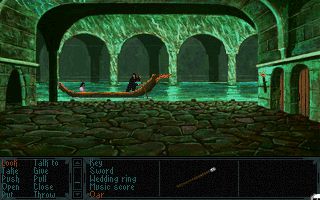 Return of the Phantom screenshots

People who downloaded this game have also downloaded:
Realms of The Haunting, Ringworld: Revenge of The Patriach, Rise of The Dragon, Legend of Kyrandia, The: Hand of Fate, Gobliins 2