Radical Dreamers is a well-written "sequel" of sorts to Square's famous Chrono Trigger RPG for the SNES system. In contrast to all the other games in the series, this is an "interactive novel" - a genre that is quite popular in Japan, but none of its console-based releases ever made it overseas. The background and description on Chronicles fansite goes as follows: "Shortly after Square finished production of Chrono Trigger for SNES, Nintendo put out a small add-on for the system called the Satellaview, a perhipial that allowed players to download games directly from a satellite instead of using cartridges. To keep production times down, many elements of Chrono Trigger appeared in the games Square made for it. An until recently little known game, Radical Dreamers: Nusumenai Houseki (translated meaning Unstealable Jewel), used the story of the game.

Radical Dreamers, unlike most traditional Square games, is not an RPG but a Text Adventure similar to the Choose Your Own Adventure book series. A player would read a few pages, then make a choice from a giving selection. Both navigation and battles worked in this way. The one downside was that the Satellaview was only released in Japan so the game was entirely in Japanese. This would leave English speaking players completely unable to play the game until mid-April 2003 when Neo Demiforce released a complete English translation patch for the Radical Dreamers ROM.

The story should seem familiar to those who played Chrono Cross as the story of Radical Dreamers was later reworked to form the basis of Chrono Cross's story. The game starts off with Serge, Kid, and Magil (who is obviously Magus to those who played Chrono Trigger) heading into Viper Manor to steal the Frozen Flame and pretty much the entire game takes place within the mansion. You'll later meet several other characters from Chrono Trigger and Cross and hear references to a few others. The story itself doesn't actualy fit into the Chrono story line anywhere as it was overridden by Chrono Cross's."

Although it was designed primarily for Chrono Trigger fans to explain loose ends and provide a fun "side story" before Chrono Chross begins, the excellent writing (which shines through in Neo Demiforce's superb translation patch) and interesting plot should appeal to fans of fantasy-based games in general. If you think you can look beyond limited interaction to the interesting story beneath - and you should be able to, if you are a fan of modern text adventures - you will probably find Radical Dreamers a worthy read. I never played any game in the Chrono series before playing this game, but I was still able to follow the story and be drawn into the world of colorful characters. Also, even though it is not a long game, there are seven possible scenarios depending on your choices - which increase replayability substantially. Annoying random battles are just about the only complaint I have about this game - RPG-style random combat doesn't translate well to text-only medium, apparently. Otherwise, it is a worthy read for fans of text adventures in general and Chrono Trigger fans in particular. Recommended! 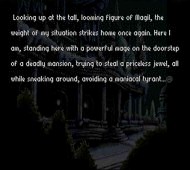