Not a "computer game" per se but more of an "interactive comic book," Pangea: Return to Planet Earth is one of the earliest releases of its kind prior to the rise of CD-ROMs. Other than Infocom's short-lived Infocomics series released in late 1980s, no developer has revisited the niche genre until this release from ICE Inc, a now-defunct comic magazine company that wanted to explore the PC as a new medium for their artists' work.

The first and last release in a planned series, Pangea plays like your typical Choose Your Own Adventure interactive book: you are given choices during each narrative scene, each of which leads you down a different plot branch. You can replay any 'page' you have read before, or jump to different sections of the story. The mouse-driven interface is easy to learn and use, and the presentation is good: save for the interactive buttons at the bottom, the entire screen is filled with graphics and description text.

The story itself is quite interesting, although by no means original or exciting. The writing is mostly good, and the background graphics, while static, are well-designed and fit well with the narrative. Overall, Pangea is a solid effort in the short-lived genre that was reborn only shortly in mid-1990s with several interactive comic book on CD-ROMs. The story in Pangea is not one-tenth as profound as Portal, but as far as science fiction goes, it's not bad and the writing is decent. Worth a look and play through at least once to the end. 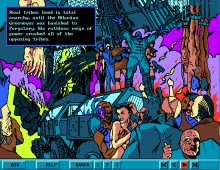