I can't think of a better way to describe this deserved winner of the 1998 IF Competition than Paul O'Brian's review: "It's just so patently clear that Photopia is not interested in puzzles, or score, or some battle of wits between author and player. Photopia is interested in telling a story, and it succeeds magnificently on this count. Unfortunately this deprives me of the use of the word "game" in describing it -- perhaps I'll just call it a work. In any case, it's a work that anyone who is interested in puzzle-less IF should try." I won't even mention the plot lest I spoil it for you. Yes, the game is THAT good. A must play for anyone with even a passing interest in IF. 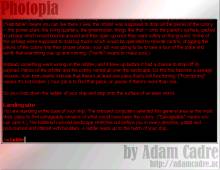 People who downloaded this game have also downloaded:
No-Action Jackson, Oddworld: Abe's Exoddus, Realms of The Haunting, Lost Files of Sherlock Holmes 1 (a.k.a. Case of the Serrated