Divide by Zero's third adventure release is an uneven space opera that has interesting puzzles and plot-- marred by a huge amount of gratuitous violence and prafanity that may turn many players off.

Played in the third person through an extremely linear path, Orion's plot revolves around your character's investigation of the death of his son at a research station in deep space. Other, more farfetched (or derivative) plot elements come into play later in the game. Much of the backstory is provided in a nifty little graphic novel packaged with the game, entitled "Devlin's Story". Other information, as well as comprehensive installation notes, are included in a well-presented game manual. Even with these aids, however, it was difficult to free up enough low DOS memory to run the game with sound card support. Orion does not identify how much free memory it requires, so there may be some trial and error in fine-tuning the game for best operation. To allow the game to run in less conventional memory, several command-line switches are suggested, which apparently display the screens at a slightly-lower resolution and offer automatic (but slow) scrolling at the screen edges.

The point-and-click user interface performs satisfactorily, with hotspots identified on the screen and possible object interactions displayed with the right mouse button. This "giveaway" of information on how you can act upon objects may make the game puzzles rather predictable and easy. On the other hand, you may find yourself spending the majority of gameplay merely moving your character from one station destination to another - often a very time-consuming process since no "zip" mode or shortcuts have been provided and access points seem arbitrarily restricted from each other. We'll suspend our disbelief about the amount of gravity on a 10-acre asteroid.

Despite some good puzzles, the game is chock-full of completely-gratuitous profanity. If you're offended by that or simply don't see it as adding anything to the atmosphere of an adventure game, then you might want to avoid The Orion Conspiracy altogether. There are also a few mildly-graphic scenes of animated violence, which, together with the language, seriously hampers what enjoyment you can get out of it. Beware! 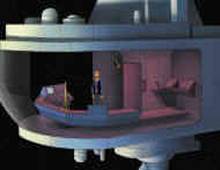 People who downloaded this game have also downloaded:
Mission Critical, Sanitarium, Little Big Adventure 2 (a.k.a. Twinsen's Odyssey), Lost Files of Sherlock Holmes 1 (a.k.a. Case of the Serrated, Other Worlds