Before I get to the game itself, a brief introduction to the world of Amber is in order for the uninitiated: at the center of reality is the land/kingdom/universe of Amber. Emanating from it are the Shadows -- other universes or realities -- and members of the royal house of Amber have the ability to walk from one Shadow to the next. In an infinity of Shadows, any world that can be imagined exists somewhere. Amber itself is more 'real' than the Shadows, and when Oberon, its ruler, disappears, it is for Amber that his nine sons compete.

With this backdrop, the game begins with you, Corwin, one of the Princes of Amber, who must compete against your brothers for the throne. As in the novel, you will travel from the real world into the fascinating fantasy world of Amber, where things are similar to our 20th century world, but imbued with subtle differences as only our minds can create. Nine Princes in Amber deserves recognition for being one of the first (if not THE first) Telarium games to break the mold of action/adventure blend the company is known for. Instead of enduring another pointless maze or endure an action sequence, you will instead need to focus on how best to interact with your brothers and other characters to win their favor (or be rid of them, if they simply won't help). The parser, although still limited, is now expanded to understand a lot more communicative verbs, such as FLATTER, CONFESS, and CONTACT-- all of which you need to use to win the game. Observing the personalities of other characters is therefore key to winning the game. And as icing on the cake, there are also several fun, non-maze mini-games: most notably the Mind Game which requires you to THINK of various objects, and the Pattern game at the end that will take a while to master.

Overall, Nine Princes in Amber is a fun, well-written, and enjoyable game that will please fans of the novels, although the lack of a good background story and plot development will confuse those who are not familiar with the series. 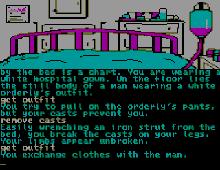 People who downloaded this game have also downloaded:
Lost Files of Sherlock Holmes 1 (a.k.a. Case of the Serrated, Stephen King's "The Mist", Realms of The Haunting, Neuromancer, Time Quest