One of the finest examples of an action-adventure hybrid, Mick is an ambitious and clever game from DOKA, a Russian developer. You play a young boy who has been transformed into a snail by an evil witch. Cast down into the dank dungeons, you must find your way out, rescue your girlfriend, and defeat the witch for good.

The gameplay is deceptively simple, since as a snail there is not much you can do at first. You can move around the dungeon, and nudge small objects. It is not until you discover that you can transform into other animals that the cleverness of Mick begins to shine and the game gets more interesting. You often have to do the right series of transformation to overcome tight spots and physical puzzles, and the level design is ingenious throughout. The game is all in Russian, but there is very little text to read it doesn't matter much.

In contrast to most games that claim to be an "action adventure" and end up being little more than platformers with plots, Mick a true game in the niche genre. Similar to Bad Mojo and Imogen, Mick implements the metamorphosis idea much more fully and creatively than the other two games. The game is truly unique, challenging, and innovative - definitely deserving of a spot on the hard drive of everyone who is a fan of Out of This World. 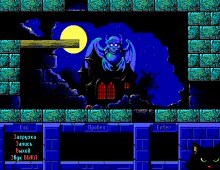 People who downloaded this game have also downloaded:
No-Action Jackson, New Adventures of Zak McKracken, The, Out of Order, Jonny Quest, Mission Critical