Lost Dutchman's Gold is a below-average BASICA game distributed only among IPCO members. Due to limitations of the BASIC language and early 1980 hardware, the game amounts to little more than a quirky piece of PC nostalgia. From the MobyGames description: "Lost Dutchman's Gold is a text based adventure game. Your goal in the game is to find the legendary lost Dutchman's gold. You begin the game in a miner's shack; searching about, you find a map which seems to indicate where the lost gold is located. Now you'll set out on a dangerous quest through deserts, mountains, and even ghost towns in order to locate the mine where the gold is buried. The ghost of Back-Pack Sam (better known as the computer) will guide you on your quest by providing descriptions and clues. You get around and interact with the game by entering two word commands. Good luck!" 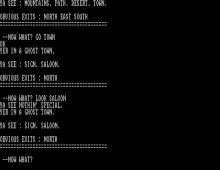