Probably the only game from Coktel Vision that was designed with kids in mind, Little Red Riding Hood is a hodgepodge mix between adventure and action elements that are, more often than not, more frustrating than fun. The plot is based on a familiar bedtime story that most of us grew up with: little Red Riding Hood is an innocent young girl who has a harrowing encounter with a hungry wolf that is pretending to be her ailing grandmother (exactly how a huge gray wolf manages to look like an old woman is beyond me). She must, of course, try to outwit the wolf in order to survive.

The game lets you play as either the heroine or the wolf, both of which follow the same gameplay pattern, only with different plots. The game's first sequence, for instance, is to dress up either Riding Hood or the wolf in their appropriate outfits. This is more or less a pointless clicking exercise, where you just randomly click at various objects on the screen until all the objects are found. Fortunately, the remaining parts of the game are not this inane, and feature some fun arcade sequences and inventory-based puzzles.

None of the game's sequences is difficult even on the hardest difficulty level-- a fact which is probably due to the game being designed for kids. As a kid's title, though, the game is still disappointing: it lacks any educational value, and some arcade sequences may be too frustrating for young gamers. Little Red Riding Hood is therefore best regarded as a curious artifact of Coktel's inconsistent career, and little else. 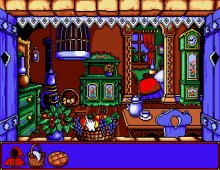 People who downloaded this game have also downloaded:
King's Quest 1, Lost Files of Sherlock Holmes 1 (a.k.a. Case of the Serrated, Jack The Ripper, Inspector Gadget