Larry Vales: Traffic Division was made by a non-programmer, a person named Phillip J. Reed who used Adventure Game Studio to create this game. And boy, he sure did a good job! The game is filled with great humor, funny situations and even the story is one big weird situation!

Scientific department of local police station had developed an advanced traffic droid who eventually went berserk and started punishing citizens for even the smallest "crimes", such as bad parking. Now police is sending its dumbest officer (Larry) to find and lock the droid somewhere until the batteries run off. Of course, you play the role of Larry Vales as you arrive to the local hotel where the droid was last seen...

This may be a freeware title, but it deserves your attention. It may be a bit short and maybe even too easy, but the humor in the game is something to be seen.

One of the best amateur adventure games I've ever played and possibly the funniest pop-culture spoof since Legend's underrated Callahan's Crosstime Saloon, Larry Vales: Traffic Division is a brainchild of Phillip J. Reed, a non-programmer who pulled off a great game using Adventure Game Studio. The plot is reminiscent of Sierra's classic Police Quest, except a lot more amusing. From the official website: "Larry Vales is an officer in the traffic patrol of Stagnant, Tennessee. Experimentation in the field of parking enforcement has been in full-force for years now, but just recently has local insane scientist Professor Semprini unveiled the new Lovely Rita 4200 Parking Enforcement Cyborg. Unfortunately it has gone slightly berserk and has been sentencing citizens to death for even the most minor traffic violations. Larry Vales and his less-motivated partner, Charlie Striker, are called upon to disable the machine at The Jolly Parasite Motor Estates, the site of its last...sight."

Anyone who's used to playing flashy CD-ROM adventures-- or even VGA adventures for that matter-- will likely wince at the very amateurish graphics of Larry Vales, which looks like they have been drawn with crayons by a 6-year-old. Once you become "sensitized" (or at least accustomed) to the graphics, though, you'll quickly discover the game's charm. Just about every description of anything in the game spoofs familiar pop culture icons, books, TV, movies, and more. Some of the game's humor is best described as "toilet humor," but it never crosses the line that separates "disgusting" and "funny". Larry's own observations about objects and characters in the game are witty if not flat-out funny, and conversations are also entertaining and never too drawn out. Puzzles are fair, a bit on the easy side, and the game is played from the standard icon-based interface similar to Sierra or LucasArts graphics adventures. Some situations in the game (especially the one involving Larry and a certain electric pole....'nuff said) are a riot, and everyone will enjoy spoofs of famous characters, from The Simpsons to Bladerunner, although you'd have to be a real pop culture addict to spot all the subtle references.

The game is a tad too short, but that is probably a good sign: great adventures always seem too short, and you'll be sorry to see it end. If you're an adventure game fan who values gameplay much more than graphics, Larry Vales is simply a must-have, and with its freeware status and the sequel on the way, you don't have an excuse for not trying this one out. 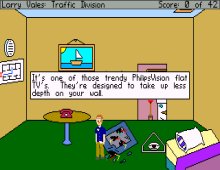 People who downloaded this game have also downloaded:
Larry Vales 2: Dead Girls are Easy, Lost Files of Sherlock Holmes 1 (a.k.a. Case of the Serrated, Legend of Kyrandia, The