Originally released for the Apple IIgs, Keef the Thief is a unique parody role-playing game about a young thief. The game and puzzles are quite absurd, but strangely addictive. Some inside scoop from developer Naughty Dog's website: "Keef was a classic sword and scorcery role-playing game. While we were making it, Andy entered sarcastic text as a place holder for what we believed would be the real text in the final release. EA liked the humor so much that they decided to make the entire game a comedy. The effect that this decision had on sales was no joke, however."

Note: The game is cracked in that you don't get thrown out of the game when entering a wrong copy protection answer. So just click on an answer often enough until you get two correct ones and can enter the game. 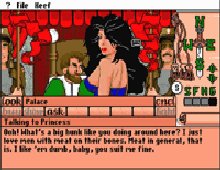