Hariboy's Quest is a decent point-and-click cartoon adventure game created by Condor Software to promote Haribo candies. The plot is cliché, but passable: similar to Simon in Simon the Sorcerer, you play Hariboy, a young boy who got sucked into a fantasy world through a painting in his room. Of course, all is not well in the lands of Bonbonia: an evil dragon has destroyed a chest that contains the candy formula. This chest is part of the magic tree, which controls access to other worlds. Luckily, there is a copy of the formula spread across three books, which are in turn scattered throughout the three worlds of Bonbonia: the medieval, wild west, and Roman areas. Naturally, your goal is to find these books, put them in the chest, and put the chest back into the magic tree. Along the way, you have to deal with pirates who are also after the same formula.

Designed primarily for kids, Hariboy's Quest boasts attractive cartoon-style SVGA graphics and a fun cast of characters comprising all of Haribo's advertising mascots. The interface is very simple: left-click to look at or activate/interact with highlighted items, right-click to bring up the inventory (or interact with items in some cases), and click both mouse buttons at once to bring up the save/load/options menu. Unfortunately, many puzzles are not easy enough for kids at all - primarily because the game suffers from a bad case of pixel-hunting. You will often have to move your mouse carefully around the screen to find a tiny item (say, 3x3 pixel big) that is crucial to your quest. Using items on people is even more exasperating, especially when they are talking. I was stuck several times simply because nothing happened when I used the right item on the NPC - I had to go back and do it several times before something finally happened.

If not for the annoying pixel-hunting and clicks-not-registered problems, Hariboy's Quest would have been quite an enjoyable game. There are over 250 (!) locations and dozens of puzzles, so it will take you more than a sitting to finish. Puzzles by and large are logical, and the marketing messages are surprisingly unobtrusive for a promotional title. Overall, Hariboy's Quest is a fun game that is worth a play-through, but you will need a lot of patience and time to deal with its niggling interface problems. 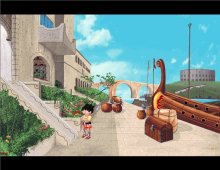 People who downloaded this game have also downloaded:
Hank's Quest: Victim of Society, Apprentice, Freddy Pharkas: Frontier Pharmacist, Duckman: The Legend of the Fall, Flight of the Amazon Queen