The Great Escape from Ocean is definitely one of the best adventures and one of the best games for Commodore 64. It puts You in role of World War 2 prisoner of war, a guy imprisoned in German concentration camp and in desperate search of escape. During the game You have to search for items and use them on the right places, attend roll calls, exercise and do all the boring stuff if You don't want to get caught and sneak around the camp during the night and arrange everything for a perfect escape. The Great Escape is a game that You simply can't miss. It has everything to keep You glued for some time and if You complete it You will feel sorry that it never had a sequel.

One of the most gripping "realistic" adventures ever produced, The Great Escape puts you in the role of a World War II pilot who is captured by the Germans and must --what else?-- escape from the prison. The puzzles are standard find-everything-that-isn't-nailed-down affair, but there are may scripted events and characters you must take advantage of. For example, figuring out the daily routine of prison life and the guards' patrol routes are essential to plotting your escape. Puzzles are obvious (e.g. se poison on guard dog), but the truly affective adrenaline rush you'll feel when implementing your plan is the best thing about this game. Overall, it's a fun but forgotten classic, and the graphics was good for its time.

It's an isometric game in all its 1980's glory. Looking awful like so many Ultimate games like Alien8, you'd be forgiven for thinking your PC has turned into a Spectrum.

Well it's quite a good game. You have to assemble all the parts of your escape kit, beit disguises, wirecutters or whatever. There's a regular routine at the camp like roll call and meals and you must be present whenever the prisoners are checked, so you have to be sneaky to get anything done. Once you have everything you need for your

escape, it's time to go!

Well the graphics suck, but in a retro way, so that makes them alright. The sound is internal speaker only (yike). And it has a tendency to crash the sound routines on exit so your speaker will burble away until a reboot. But on the whole it's quite an enjoyable game although you probably won't play it more than once.

As a POW you have to escape from a German camp. The difficulty of the game is that you have to attend the daily rules of the camp. And figure out some holes in the time-schedule. Find keys in forbidden rooms, learn the guard's routes, etc. If you get caught to many times, your will to escape has gone and the game is over. 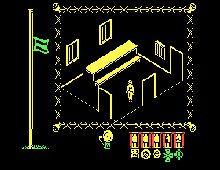 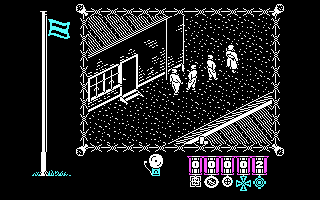 People who downloaded this game have also downloaded:
Hitchhiker's Guide to the Galaxy, The, Flight of the Amazon Queen, Bureaucracy, Hound of Shadow, The