A well-conceived adventure that suffers beyond help from poor parser, boring puzzles, and lack of plot development whatsoever, Grail Quest is a good example of how not to make an adventure game.

Lest I appear biased in this review, let's start out with the game's strong points first. It starts out promising enough: you are a last Round Table knight, entrusted by King Arthur himself to search for the Holy Grail. You can ask the king questions by typing keywords into the parser (similar to Neuromancer), or just talk to him. You even have simple RPG-style statistics: physical strength, magical resistance, and spiritual strength. The first two can decrease when you are hit in (random) combat, while spiritual strength, which is essential to retrieving the Grail, can be increased by praying at various altars and doing good deeds. The graphics, while not eye-catching, is good throughout the game, with all historical locales presented as vibrant VGA photos.

For all its attractiveness, the game's glaring flaws become obvious as soon as your conversation with the king is over. The interface, which is just a row of verbs you can use (similar to LucasArts or Sierra games), is adequate and unforgiving. You can travel far and wide, only to discover later that you already ate the bread you need to give to someone. The gameworld is vast, spanning almost the whole of England, and you'll spend most of your time finding out a way to get from town A to B to finish your errands. Puzzles are mostly of the "give X to Y to get Z" variety, and are mostly unimaginative (except for a few late-game puzzles that require you to ask someone the right question). True to Artworx' reputation as publisher of Strip Poker games, there are adult situations in the game that will make Arthurian fans cringe. Worst of all, combat in the game is more or less random, and you can die from a fight very quickly. These failings make Grail Quest a disappointing game despite decent writing and graphics. Play Arthur or Conquests of Camelot instead if you want a good Arthurian game. 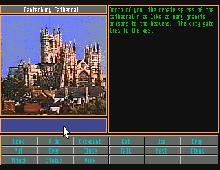 People who downloaded this game have also downloaded:
Arthur: The Quest for Excalibur, Flight of the Amazon Queen, Hariboy's Quest, Hank's Quest: Victim of Society, Heimdall