Fred's Backyard is one of the most original text adventures you'll ever come across. The game makes up for its primitive parser and lackluster writing with funny ASCII graphics, sound effects, and best of all dozens of fun mathematical puzzles reminiscent of Sierra's Rama and IF classic The Magic Toyshop.

The plot is nothing special: you find yourself at the beginning of the game in someone's backyard, with no idea of how you got there. After exploring a little bit, you discover that your goal is to help rescue Fred, the house's owner, from the clutches of a sea monster that is roaming around the vicinity. The gameplay is pretty standard pick-up-everything-that-isn't-nailed-down affair, and the parser is very primitive. If not for the jumbled-words hint given right at the beginning of the game, I would never know how to get to the bed in the bedroom to meet a crucial character (since logical sentences like "APPROACH BED" and "WALK TO BED") don't seem to work. Worse still, the game doesn't understand common IF verbs such as "SEARCH," and you have to be very precise because the parser doesn't understand synonyms or paraphrasing. This means most of the puzzles in the game that require typing something are difficult not because they are difficult, but because you will spend a long time trying to guess the exact syntax the parser is waiting for.

Fortunately, the rest of the game is a lot of fun. You will soon come across pictorial puzzles that utilize ASCII graphics to the fullest extent and many fun logic- or arithmetics-based puzzles. You can replay many major logic puzzles that you solved by launching a separate program included with the game - a nice touch. The interface is also very intuitive: you will always see all possible exits from the current location (North, South, etc.), as well as objects you can pick up.

Overall, Fred's Backyard is a fun game that boasts excellent educational value in the form of math-based puzzles. The writing and parser leave a lot to be desired, but if you are willing to forgive these weaknesses and just concentrate on the game, you'll be pleasantly surprised with many fun puzzles and good ASCII graphics. Highly recommended. 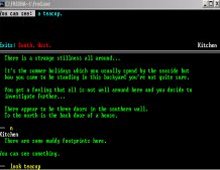