I can imagine the Telarium executives brainstorming for this one. A bunch of overweight business men, they smoke their cigars and play with their watch fobs and plot the oppression of good and honest gamers all over the world. One says, "I know! Why don't we make a text game based on Ray Bradbury's classic, Fahrenheit 451, but leave out all of the good parts?" Another guffaws, "That's inspired! But why even skirt around the good parts? Why don't we just start the game near the end of the book, after the most interesting parts are over?" The head honcho pipes in, "Marvelous! But why make the game resemble the book at all? Let's just make our own game with Fahrenheit 451 as the title!" And so it began.

The book is about a fireman, whose job in the future is to burn books instead of fighting fires. His wife keeps on trying to commit suicide but she doesn't know why. Kids go joyriding and hit pedestrians with their cars (I know, I know, Ray Bradbury should sue the makers of Carmageddon). The fireman, Guy Montag, meets a girl and he begins to question his work and society. Eventually, he becomes a fugitive and joins an underground movement that is trying to save books and independent thought. The game skims over most of that and begins with you, the fugitive, and trying to meet up with the underground and save the world! There are a lot of passwords (words are power!) and silly devices and stuff like that.

As an adaptation of one of my favorite books, this game is quite disappointing. It seems that the main way that the game tries to depict a dystopian future is by including silly deaths every couple of turns. You start off in a city park, but hey, watch out for the tigers! Don't forget about the strange sewer creatures! All of this isn't to say that the game is completely worthless. Just as one can somewhat enjoy Zork Nemesis when he pretends that it isn't a Zork game, this game could probably be enjoyed if you ignore the fact that it's supposed to be an adaptation of Fahrenheit 451. As a cheesy, fantasy/science fiction game, it might even be kind of fun. I can't say for certain. As a game from one of the bigger text game companies in the 80s, though, it definitely has its place in history and is worth checking out. Just, please, watch out for the tigers.

A nice graphical textadventure. Not following the book at all. In the game your mission is to burn all books, but doing so you only want to read them and are not willing to burn them anymore... 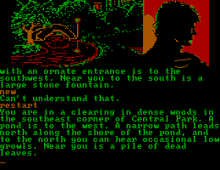 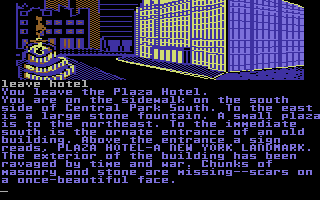 People who downloaded this game have also downloaded:
Hitchhiker's Guide to the Galaxy, The, Enchanter, Deadline, Beyond Zork: The Coconut of Quendor, Hobbit, The