Earthly Delight turns out to be a pleasant surprise when I first discovered it in March, 2000-- mainly because it's amazing that an interactive fiction game that is this innovative and well-written for its time could fade almost completely into obscurity before most gamers even had a chance to see it on the shelves. Earthly Delight opens with an intriguing premise: you woke up in the middle of the night to discover that a painting you recently inherited has been stolen. Already at this early stage, the game allows a wide variety of actions you can perform to end the first episode: if you are quick enough, you can catch the burglar in the act, and even fight with him. If he is gone by the time you reach the room, you can still discover clues that will lead to the next episode. Each episode opens in animated book style, with its own (PC speaker) music and well-written introduction.

Although the game is "shallow" in a sense that the non-player characters are poorly developed and two-dimensional, the intriguing plot and many optional puzzles and alternate solutions more than make up for the deficiency. The game has one curious parser characteristic: you need to use "GO TO" command a lot to reach certain places, although you can only GO TO that place when you are near enough. Given the expansive and confusing layout of Paris, finding a place can quickly become the most time-consuming action in the game, and truly exasperating. Despite this quirk, Earthly Delight is definitely a cut above average game of its time (1983!), and while it isn't an Infocom game, it is well worth a play through. Highly recommended, but not for the easily frustrated. 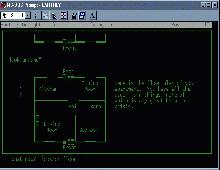