Deranged Wizard's Castle is a great "retro" adventure game inspired by Kevin Bales' classic Castle Adventure. You play an intrepid adventurer who goes inside the king's castle that has been abandoned except for a lone wizard who hides inside, protecting the secret treasury. Your objective, like in Atari's good old Adventure game, is to negotiate mazes, defeat monsters, pick up items and weapons, interact with your surroundings, and finally find and defeat the wizard. The game is played by pressing keys and typing commands like GET, PUT, THROW, BOMB, and WAVE. The "graphics" are ASCII-only, true to the original Castle Adventure. Most of the gameplay involves finding the right keys to the right doors, collecting various gems and treasures, and (the best part in my opinion) using wands and other trinkets that require a lot of experimentation to figure out their uses. If you enjoyed Castle Adventure, you will definitely also like this modern fanmade tribute that offers an entirely new game, bigger mazes, and even some surprising secrets. 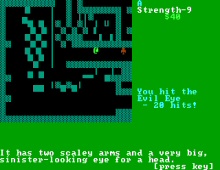