Dragonworld is a Telarium game that, true to the company's tradition, is based on a fantasy series of the same name. Your task is to journey to your friend Hawkwind to save the Last Dragon in the world from his kidnapper. As with Telarium's previous releases, the game's parser is quite adequate, and puzzles border on the easy side so there is little guess-the-verb problem.

Another gameplay element that the game inherits from Telarium's previous efforts is some action elements, although they are much less frustrating than in, say, Amazon. After you find Hawkwind, the game becomes easier as you can ASK HAWKWIND ABOUT most things to get clues or outright solution to puzzles. All in all, Dragonworld is nothing more than a your typical fantasy adventure. If you like the setting or want an easy game, you might find it appealing. Otherwise, pass this one by in favor of stronger fantasy titles, such as Level 9's Jewels of Darkness. 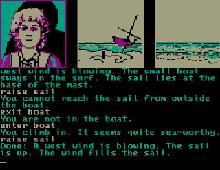