This game starts with you wake up with a bump on the back of your head. There are a few things you can remember of the last 48 hours. You were being abducted from Chicago by two men, who brought you to their boss: Malone "THE" notorious gangster from LV. There is some kind of connection between Joey Siegel a criminal of whose murder you had recently cleared.

As you discovered last night, Siegel had been running rackets in Chicago as Malone's leg man, and his untimely demise left $112,000 of Malone's money unaccounted for. And since YOU are the logical scapegoat, Malone has now made you an offer you can't refuse either cough up his $112,000 in one week's time, or he'll get killed. To make sure you don't escape he's having his personal goon watching on you. I like this game because of the interactivity with the surrounding. You can pick up almost any object and put it in your inventory. For the rest it's a "I've already seen this, done that" game. Graphics and sound are ok, but nothing special.

Unarguably the best game ICOM ever produced, Deja Vu 2 continues the storyline of the first game, only this time you no longer have an amnesia. As an ace private detective, use your sleuthing skills to uncover sinister gang plots and implement an ingenious plan to set one gang against the other. This is the one game that compares favorably with the best adventure games of the era (1989), and ICOM even generously reduced the number of useless items you can carry :) 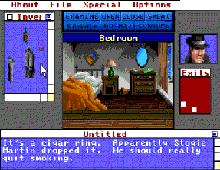 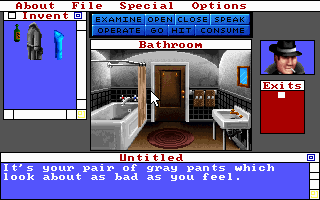