Daughter of the Serpent

Created by the same team that brought us atmospheric text adventure The Hound of Shadow, Daughter of the Serpent suffers from almost nonexistent puzzles and short length. Nevertheless, the plot, which involves ancient Egyptian curse and artifact-smuggling ring, is excellent. Many possible endings (depending on skills you select at the start) also invite multiple replays that compensate for the short length. In all, a good introductory-level game. The game was updated with voice acting and animations (although with same dated graphics) and re-marketed as The Scroll in 1996. 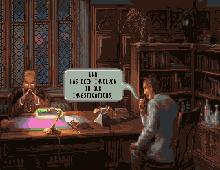 Daughter of the Serpent screenshot

People who downloaded this game have also downloaded:
Darkseed 2, Flight of the Amazon Queen, Death Gate, Dark Eye, The, Bureau 13