Despite its "cult" status as one of the most sought-after games of all time, The Dark Half is one of the worst adventure games ever made, its blockbuster license notwithstanding. The game is chock full of plot holes the size of a Buick, illogical puzzles, and very bad writing that does absolutely no justice to the brilliant novel it was based on.

One thing the game doesn't lack-- and this is true for most Capstone games-- is a great premise. Of course, that's because it's based on one of master thriller Stephen King's best-known novels. Here's a brief synopsis: as a young boy, Thad Beaumont developed a brain tumor. When his skull was opened in the operating room, the tumor turned out to be the undeveloped remains of a twin that Thad had incorporated into himself while still in his mother's womb. More than twenty years later, Thad is a successful writer with a wife named Liz and two infant children. The books he writes under his own name are "literate", but to maintain his income, he writes violent, formula fiction under the pseudonym of George Stark. When a blackmailer threatens to reveal his double identity and endanger the profitable secret, Beaumont goes public himself, "burying" Stark. That's when the murders start. As the body count mounts, Beaumont becomes the prime suspect -- his fingerprints have been found in the victims' blood -- but Thad has no idea what's going on. Has Thad's evil twin come alive, or is some sort of evil entity is loose in the world?

The game opens with a very brief introduction, and you, as Thad, standing in the cemetery-- staring at the symbolic grave of "buried" Stark. Unfortunately, plot holes and inane puzzles rear their ugly heads as soon as you get into the game. Thad's goal throughout the entire game is to avert the police' suspicion that he's a murderer, mainly by hiding evidence that points to him, and collect evidence that Stark is the real murderer. All well and good, except that you'll be wondering why this town's police is so dumb. For instance, the police will arrest you at the end of the first day if you fail to hide all evidence and wipe all fingerprints... but there's the murder weapon -- victim's fake leg-- lying in the back of the truck that you cannot interact with. The question, of course, is why the police didn't just dust that leg for fingerprints, or, if your prints match Stark's anyway, why you should bother to erase your other fingerprints at all.

The game goes on in this vein, throwing illogical puzzles in your face once in a while. One of these, is the fact that Thad has to smoke before he could write, and he MUST write every day to further the plot. This is of course something that's never mentioned anywhere in the game, and the appearance of fresh, new sheets of paper at every new crime scene that Thad can use to write is as mysterious as most things that go on in this game. Despite a few nice touches, such as sufficiently spooky cut-scenes and good ambient music, The Dark Half is simply just too inane, illogical, and badly written. King's fans beware: this is NOT every 1/100th of a how good a novel is. Capstone definitely lives up to their worst performances in this release.

Note: This version has been patched to run on Pentiums.

This adventure game is based on the novel written by Stephen King. The interface looks a bit like the Scumm's from LucasArts. You play Thad Beaumont who has to stop his twin brother of doing some terrible crimes on earth. The music is very nice as are the graphics. 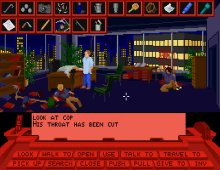 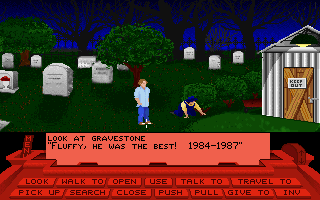 Dark Half, The screenshots

People who downloaded this game have also downloaded:
Darkseed, Darkseed 2, Arthur: The Quest for Excalibur, Bureaucracy, Clue!, The (a.k.a. Der Clou!)