Cosmic Spacehead is a decent arcade adventure drawn in the illustration style of the 1950s (TV's The Jetsons comes to mind). Bright graphics, a simple point-and-click interface for the adventure elements, interspursed with enjoyable arcade romps will keep players' attention as they explore, with Cosmic, the alien landscapes. The plot is wacky enough: to obtain a hero's welcome and much-needed cash, alien Cosmic must return to Earth and photograph the previously unexplored planet to document his visit.

Cosmic Spacehead is an intriguing mix of adventure and arcade action gameplay. The majority of gameplay is an interactive arcade adventure which takes Cosmic across the many bizarre locations of his three main stops on the way to Earth: planet Linoleum, Detroitica a vehicle factory on a lone asteroid, and a space station. Each destination is divided into many smaller play areas where Cosmic can interact with other characters, manipulate and use objects to further his quest. True to Codemasters' expertise as makers of fun action games, Cosmic Spacehead includes many action sequences: traveling between the adventure play areas involves the successful completion of a wide variety of 32 arcade-orientated action games, ranging from astro-car racing, robot attacks, to asteroid fields and many more. Unfortunately, the adventure portion isn't as good: the solutions to most puzzles are all too obvious, and often require items that you can only get by random luck-- definitely not a good game design. This flaw limits Cosmic Spacehead's appeal only to action fans who are interested to try out the adventure genre, or adventure fans who like a lot of action in their games. Die-hard action and adventure fans should look elsewhere for their fill. 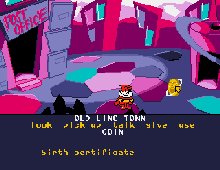