Unarguably the best game from the group of renegade ex-Sierra employees that made up Tsunami, Blue Force is an excellent police adventure by none other than Jim Walls, of Police Quest fame. Despite easy puzzles, hackneyed dialogues, and a cliche plot, the game features a great interface, charming characters and graphics, and lots of optional points. Help rookie Jake Ryan on investigations that will shed light on his parents' mysterious death. It's much easier than Walls' Police Quest games, but it's still a great adventure that will particularly appeal to beginners. Much better than overhyped Police Quest 4 (which was not designed by Walls) at least. 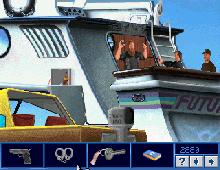 People who downloaded this game have also downloaded:
Bureau 13, Police Quest 3: The Kindred, Beneath a Steel Sky, Apprentice, Apprentice II: The Knight's Move