Berlin 1948 is a mix between the Action, Adventure and Roleplay genres. You will have to run around in Berlin, as the title states, trying to locate nuclear weapons. From the start of the game it's quite confusing and you only get very little information about what you have to do and where you should do it. The different genres are represented by different parts of the game as it offers several action sequences and the interface and controls are similar to many other roleplay games while the puzzles in the game are regular adventure content.

The controls are quite easy (after you have gotten used to that you can't use the arrow keys to move with) and whenever you can do something with a thing a small icon will show up when you scroll the mouse over the place. You can obtain additional information about a thing, talking with people, go to a place etc. using this technique.

The graphics are actually very good and as mentioned above the game controls are very easy to use. It is missing a bit of sound though but again not really that much needed and in an adventure soy game right? Overall a below average adventure game not getting near any of the most popular adventure games.

Time Warp's second game that is more of a role-playing game than traditional adventure, Berlin 1948 is still an immensely interesting game set in Cold War Berlin. Your job: scour the city in order to recover a missing nuclear weapon (perhaps inspired by earlier Amiga game Sum of All Fears). Gameplay is reminiscent of Accolade's The Third Courier in that you must navigate a large city map, looking for informants, suspects, or other clues. There are also some action elements here that are well integrated into the game, such as car chase sequences that are good enough to warrant a separate game. The adventuring portions, however, are not as well thought-out. The inventory interface is clumsy, and dialogues are poorly written. You'll spend a lot of time wandering around Berlin without a clue of what you should be doing it. To add insult to injury, there is a time limit in this game, so saving often is necessary. Overall, a good effort that can't measure up to other spy adventures. Even Infocom's all-text Border Zone is a more exciting spy adventure than this game. Play it only if you've played every other spy adventures you can think of :)

Deep-cover CIA informants in the Eastern sector have verified that Soviet agents have smuggled an atomic bomb into West Berlin. It is believed that the weapon will be used to hold the city hostage to Soviet demands, and detonated if any attempts to disarm the device are uncovered. It's an unacceptable situation. Find the nuclear weapons in Berlin and destroy them. 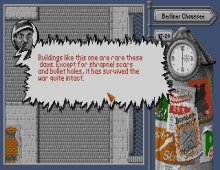 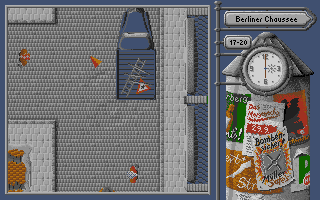